There’s History Behind All of Our Products

Brand-new building materials will get the job done, but they lack the history and character reclaimed wood brings to a project. When we source reclaimed barn wood and hardware, we experience firsthand the history behind our products.

For instance, when we reclaimed a 19th-century barn in York County, PA, we continued the legacy of early America. The barn sat on a plot of land originally purchased by a family from Scotland in 1762. Descendants built the barn in the early 1800s, and it served faithfully to house their horses and mules, hay and grain, and carriages and wagons. The wood used to build the barn was treated with a torch to preserve it, and at some point, it was whitewashed. With time, the wood weathered to gray.

The barn and surrounding property changed hands several times over the years. Repairs were made, but the barn stood pretty much as it had since the 19th century, a testament to early American craftsmanship.

Vintage Wood and Forged Iron treated this history with the respect it deserved. Over five days in early 2019, we carefully dismantled the barn so it could live on in future building projects. Some of the barn siding was eventually used for ceiling panels in a summer home in Vermont. A snowstorm and soft ground presented challenges, but the result was worth it. In addition to beautiful hickory, white oak, red oak, hemlock, and pine lumber, we were also able to reclaim several door hinges. The reclaimed wood has since been reborn as hand-hewn mantels and decorative beams, flooring, wainscoting panels, and other architectural items, continuing the story of fine American craftsmanship. 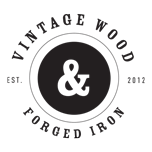